CHARLOTTE, NC (WBTV) -  The National Weather Service has confirmed that four tornadoes ripped through the Charlotte region on Wednesday. One each in York and Union Counties in South Carolina, and one each in Cleveland and Davidson Counties in North Carolina.

The National Weather Service confirmed that a strong tornado touched ground in York County on Wednesday as five people were killed across the Charlotte region and dozens more were injured.

An EF-2 tornado was confirmed southwest of Rock Hill, which left three people dead and another possible tornado was reported just outside Rowan County, NC in Davidson County, where an adult and child were was killed.

In Union County, SC, and EF-0 tornado touched down six miles east of the town of Union, according to the NWS. The tornado traveled 200 yards with maximum winds of 75 miles per hour.

An EF-1 tornado left a third of a mile path of destruction in Shelby in Cleveland County around 4:18 p.m. Wednesday.

This is the first deadly tornado in the county since 1926, emergency management officials told WBTV.

A tornado is believed to have touched down in Chester County on Darby Road near Lake Oliphant, where a tree crashed into a house, a mobile home was overturned and a car was overturned, said Emergency Management supervisor Eddie Murphy. 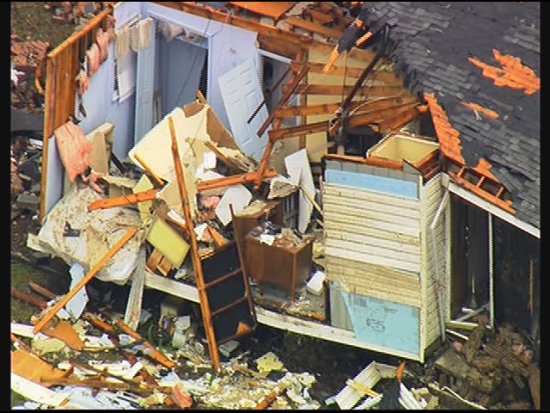 Click here to view 80+ photos of the tornado damage

The possible tornado that moved southwest of Rock Hill caused severe damage to one area on Williamson Road near Highway 324, destroying 7 homes. The York County coroner reported that three people were killed in that area.

WBTV has learned that 60-year-old Charles Kenneth Hafner and 62-year-old Barbara G. Hafner were killed in the storm. The third victim is listed as 60-year-old Oran Steve Courtney.

In that area, a mobile home was picked up by winds and thrown 100 yards over another home. A car was also overturned and flipped onto its roof and another car was tossed on its side where trees then fell on it.

Also near Rock Hill, trees are reported down on Neal Shoals Road, Old Ferry Road, Lockhart Road and Highway 49, according to the N.C. Highway Patrol.

Damage from an earlier storm in Cleveland County caused several trees to fall in Shelby and there was damage reported to a mobile home on Airport Road in Shelby.

In southern Davidson County, WBTV has learned that a three-year-old girl and her grandmother were killed near Lexington when a reported tornado touched down just across the Yadkin River.

Neighbors along Hendricks Mill Road told WBTV's David Whisenant that rescue crews found the grandmother's body when they arrived on scene.  The little girl was thrown into a valley behind where the home stood and was heard crying.

Crews were able to dig her out of the rubble and rush her to the hospital, where she died from her injures on Thursday morning.

The neighborhood is a mixed development with eight to ten homes mixed between mobile homes and modular homes.

The home where the grandmother and little girl were during the storm was destroyed in the storm. Clothes, sheets and towels were seen hanging from trees nearly 40-feet in the air near where the home once stood.

The damage is concentrated  along Highway 64 and Hendricks Mill Road and on Allred Road in Lexington. In addition to the two people killed in this area there are at least 10 injuries from the  storm that moved through there.

Three or four other homes in this area sustained damage in the storm. One home was blown completely off its foundation. Other homes have some damage from the storm.

In Rowan County, just before 11 pm Wednesday rescue workers had to help someone out of their car near Wendemere Circle and Old Mocksville Road.

Copyright 2011 WBTV. The Associated Press contributed to this report.

14-year-old found in hotel room was dead for a week before anyone called authorities, coroner says