On Sunday night, deputies received a call to respond to Thomas Griffin Rd., to look into why a suspicious white pickup truck was behind the property loading an old pick up truck onto a trailer. 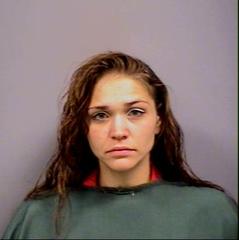 After the suspects were arrested, the officers located several items that were reported stolen from an automobile break in that occurred Friday morning on Highway 219 in the Halfacre Rd. area in Newberry County.

The officers also located a drink bottle that was bubbling in the suspect's vehicle. The deputies realized it was an active meth lab and backed away from the vehicle while notifying investigators, fire department and the Haz-Mat team to respond to the scene.

"A lot of people have a misconception when they see we busted a meth lab," said Foster. "They're thinking of a lab at a hospital or your chemistry lab at high school. That's not the case.  This is a process that you use things you can get or steal from a store."

Because the bottle contained dangerous chemicals that could explode spewing dangerous and hazardous material, the officers had to neutralize the reaction on site. They then called an OSHA certified clean up was contacted and responded to the scene. The cleanup crew was able to safely secure and dispose of the chemicals that were found.

"This was a very dangerous situation for the officers and the general public," said Foster. "The deputies and emergency responders from Friendly Fire Department, Newberry City Fire Department, EMS and the Newberry Haz Mat team did a fantastic job in their response and handling of the situation to make sure that the situation was mitigated with no injuries or environmental damage."

The suspect's vehicle also contained Sudafed and other items consistent with the meth making process, the sheriff said.

Two people were arrested at the scene. Law enforcement identified them as:

Both were charged with Grand Larceny, Manufacturing Meth, Breaking into an Automobile, Carrying a Pistol Unlawfully, Open Container and Drug Paraphernalia.

"This couple was riding around stealing and while they were stealing, they were also in the process of cooking meth so I guess they were using their time efficiently," said Foster.

Foster said they're investigating whether or not several other items found in the suspect's vehicle were stolen. "We are so glad that this situation was reported it to law enforcement," said Foster. "This had the potential to be a very violent and dangerous situation and is exactly why it is best for citizens to contact law enforcement rather than confronting someone on their own."

Man accused of throwing woman to ground, attempting removal of clothes in Walgreens