COLUMBIA, SC (WIS) - More than half of the pit bulls seized in a dog fighting ring bust last month have been fostered out to caring families, Richland County Sheriff Leon Lott said Tuesday.

The dogs were all seized on September 8 from a wooded area on Camp Ground Rd. Deputies were called to the area for a report of barking dogs, but when they arrived they found much more. Investigators said when deputies got to the area that night, they saw two dogs fighting, several people watching the fight and several dogs chained to the ground along a path. 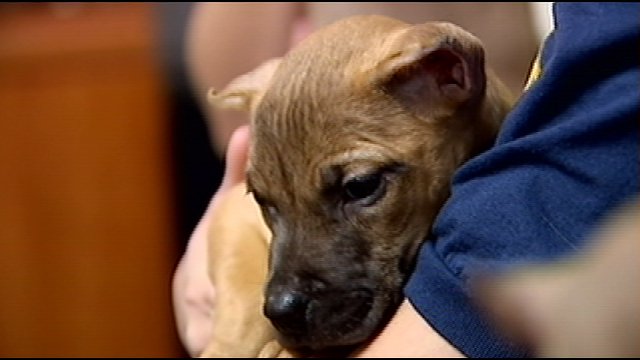 Click here to view images of the dogs, the suspects, photos from the scene and of evidence from the operation

In early October, a foundation was set up to offset the costs of caring for and boarding the 24 pit bulls and to help find foster homes for them.

15 of the dogs now have foster homes. Among the people to foster the dogs is a Richland County deputy. Deputy Amanda Burwell has taken in one of the puppies who had his ears cut off by one of the suspects, Lott said.

Several of the dogs are also being trained to be service and companion dogs – providing care and protection for people all over the country.

The sheriff added that $1,700 in donations has been given by the community to help defer the costs associated with caring for the dogs.

All of the seized dogs, including 3 new puppies, have received their shots, have been heartworm tested, micro-chipped, and are receiving heartworm, roundworm and hookworm medications.

The Sheriff's Department continues to work with a large number of individuals and organizations in the care for the dogs and fostering them out including Animal Farm Foundation, Pawmetto Lifeline and The Humane Society.

Anyone who wishes to assist may do so by sending checks payable to the Richland County Sheriff's Foundation, P.O. Box 1182, Columbia, South Carolina, 29202.  The funds donated will be used to offset the costs in caring of the dogs and to cover medical expenses along with boarding.

If you are interested in assisting with fostering one or more of the dogs, you are urged to call Pawmetto Lifeline at 803-622-4748.

Five people have been arrested so far in connection with the dog fighting ring. It is unclear if there are any other suspects.