Dog found with teeth sawed off

WEST COLUMBIA, SC (WIS) - The people at PETS, Inc. see animals come through the door in bad shape everyday, but some there say this one takes the  cake. 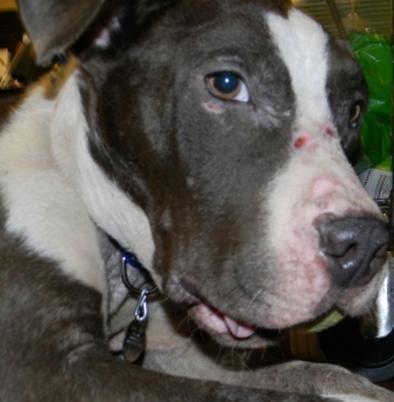 Click to view more pictures of Cowboy and other animals up for adoption at PETS, Inc.

A dog they've named "Cowboy," walked in their doors timidly Saturday with a tennis ball in his mouth, bite wounds from the nose to tail, underweight and dehydrated. When they opened his mouth to determine his age, they were shocked to see that all of his teeth had been broken or sawed off, indicating that he had been used as a "bait dog" to train juvenile Pit Bulls for fighting.

The skinny Pit Bull was found on Friday on Sandy Run Road in Gaston, an area that has produced other abused dogs, according to PETS, Inc. Cowboy's neck has a gray ring of broken hair typical of a dog who has struggled against a chain, shelter employees said.

When he first got to PETS, Inc., Cowboy paid no attention to the employees or to any of the other dogs in the room.

"It's just an amazing thing that a dog could have been through as much as he's been through and still be so accepting and gentle with people," said Jane Brundage. He was solely focused on the tennis ball that was given to him by the young woman who found him.

"It's time that we all spread the word and ask everyone to keep their eyes open for suspicious illegal behavior in that area," a PETS, Inc. representative said. "The HSPCA has a standing reward of $5,000 for anyone with information that will lead to a conviction for dog fighting in South Carolina. Gaston is a great place to start looking."

"His mouth is a real big concern because we know all that's going to have to be addressed we don't know how much surgery is going to be involved," said Brundage. "But, he can't go the rest of his life without addressing this because the roots are still in there and they're all damaged and broken and cracked and not good."

"I think the only constant in his life until this point was a tennis ball, which is very sad," said Brundage. "He's such a wonderful dog no one ever gave a chance to."

Meanwhile, Cowboy is resting with a foster family. He is not currently available for adoption because PETS, Inc. employees are still doing a medical evaluation and other tests on the dog. According to the folks at PETS, Inc., he seems to be excellent with small children and oddly indifferent to other dogs.

If you know anything about this incident, you are urged to call Crimestoppers at 1-888-CRIME-SC.